People ask us, how do you go about making a high quality, popular podcast? Well, I have no idea. But here’s how we made ours.

The Producer was always supportive of our changes to the script

Now, there’s almost certainly something you should do in this stage. Almost certainly. We invested a lot of time and money in trying to figure out what it was, and came up empty, so you if you work out what we should have been doing, then do let us know. While all this was going on, we put a load of dates in the diary, and booked some studio time.

In February 2013, five of us got together in an attic room of an office building, and set about filling up post-it notes with ideas and sticking the on the walls. This is apparently how wallpaper designers work too. We quickly gravitated towards the time travel idea, and began working out the characters and stories. After a few sessions we had an eccentric cast of characters each with their own desires and frustrations, but enough about the writers. Regardless, we worked out six story-lines for twenty five minute episodes, and nearly four jokes. 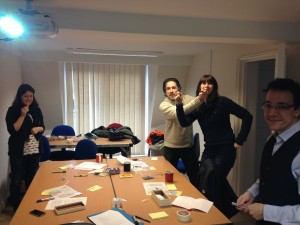 The creative team work on the “teapot” scene 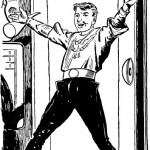 The musical theatre elements were mostly edited out

Three people were in the frame to write the scripts. The team set off working from the story lines they were given. and produced some drafts that had a running time of about twice that wanted. Briefly, Tallington looked like it would be a nine hour cycle, with a cast of two hundred and seven, that could only be performed on a forty foot revolving raft in the centre of the Thames. There was a short discussion which led to a rewrite with the raft being cut, along with most of the musical theatre elements, and the scene where all the Orcs charge the burning castle. This was felt to be out of keeping with the rest of story, which was set in 1950 and didn’t have any Orcs at all. Not even small ones. A team of highly trained script editors were hired and issued with pencils. Their main role was to poke the writers in the ribs with the pencils every time they slumped forward onto the keyboard. 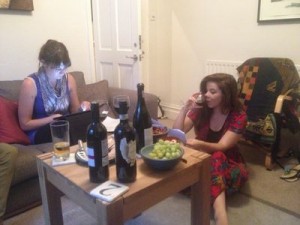 The cast in rehearsal

Now it was time for the script to meet the cast and directors in the first read through. The aim of this session is to finalise the casting, and work out what still needs to be done to the script. The actor’s aim is therefore to get all the best lines for themselves, and the writer’s aim is to avoid any changes to the script whatsoever. The strategy of the writers was to provide so much alcohol that the actors were too drunk to criticise the scripts. Disputes were usually resolved amicably. At this stage we also worked out the rehearsal and recording schedule, which involved three computers working round the clock to determine all the millions of permutations of possible characters, scenes, and availability. Unfortunately, the answer will remain forever unknown to science, as a rabbit ate through the power cable minutes before the answer was expected. Instead we went for Mondays, Wednesdays and Thursdays. 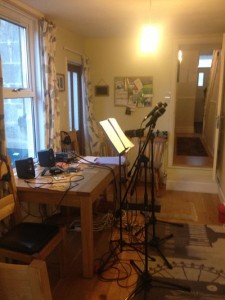 A Good turn out in the Rehearsal Room

This year, we took the unprecedented step of rehearsing. This is the process by which the episode directors attempt to get the cast to stop drinking, and to read the script in advance of the the recording session. It was a no score draw. Due to scheduling conflicts, the rehearsals had to be held after the recordings, which resulted in a reduced turnout.

The race was now on between the directors and the writers to get as much as possible recorded before the writers could change it. The role of the script editor was now changed, and they were to stand over the scripts and physically defend them from being changed by the writers. 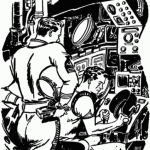 The studio equipment was easy to use

At this point, the recording schedule became so complex that we took to recording anything we could using the people who showed up, which analysis shows correlated more strongly with phases of the moon than the original call sheets. Also a factor was that the studio was well insulated both in the infra-red as well as sound, and so scenes had to be chosen alternating small and large numbers of people to avoid overheating.

Editing was pretty straightforward, all the editor had to do was to take the completely rewritten scripts (the writers got hold of them again) and reassemble words from the original recordings to match the new script, and then source some simple sound effects (such as an Edwardian horse drawn carriage colliding with a fruit stall, for which original I’m told recordings are widely available on the internet). After only four months, the episodes are available to release.