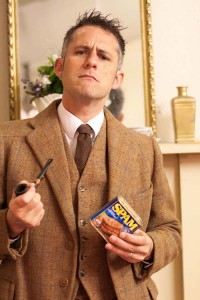 An article by George Smyth

When the people at We Are Not Alone got in touch with me and asked me to write an article on time travel, I was delighted. Even better, due to the wonders of time travel, I had over seventy years in which to write it. Just as well, really, as I only just got it done in time.

The Tallington team routinely use their portal for time travel, but is such a thing ever a possibility? And if it is, why are we not continually visited by time travellers from the future? Perhaps they’ve looked at the downloads chart. Physicists remain dividied into two main groups – those who don’t think time travel is physically possible, and those who are fans of Doctor Who. Some think that time travel into the past seems at least to be a theoretical possibility, but it is beset by numerous practical difficulties. What colour should the time machine be? And as for controlling a time machine, well I have enough trouble reversing my car. I don’t know how Eugene does it.

As a historian, I’m ill qualified to discuss the science of time travel, its practicalities, most types of art, fashion, sex and the social sciences. Instead, I have gathered a selection of historical accounts that represent the experiences of time travel people have reported over the years. Marie Antoinette, from a recent photograph

A time slip is a paranormal event experienced by one or more people (rarely fewer) who find themselves experiencing events from a different time period. Often, they are unable to interact with people around them, and the experience has been compared to shopping in Halfords. The classic example of this is the Moberly–Jourdain incident in which two ladies in 1901 travelled to Versailles and saw Marie Antoinette. So what was Marie Antionette doing in 1901? (Sketching, I think.) Or were the two ladies transported to the time of the French Revolution? And if so, what was the food like? A further time slip occurred on returning home, and it was 1911 before they recorded their experiences in print.

There are many more modern incidents, some of which have been scientifically explored in prime time television lash-ups. (Mock ups? – ed).  Some are trivial, such as the incident where Veranda Front-Botham was browsing in a branch of Hobbs and suddenly found herself terribly out of fashion. Others tales are more complex, such as that of the Simpson family, who while exploring the South of France in the 1970s were caught out by an unexpected fall of night. They decided to stay in a nearby hotel, which by all accounts was rather basic, lacking such mod-cons as glass in the windows and electric light. They were from Britian in the 70s, so this sort of thing was normal to them, along with poor customer service and prawn cocktail, so they stayed. The following morning, they ate their breakfast, paid the extremely low bill, and left. Afterwards, mystified by the old fashioned clothes and customs of the staff, and drawn by the extremely low cost, they tried to return 10 years later, only to find the hotel gone, and the area levelled and flooded to make way for a marina.

I have also come across many accounts of people who claim to have travelled through time deliberately. These usually adopt the same pattern. For example, a man in a silver suit calling himself Xylum appeared in New York in 1929, claiming to be from the future, although most experts agree this was just to cover up a fashion faux-pas. Xylum went on to make a number of dark predictions of the future, all of which turned out to be incorrect, a fact he attributed to poor handwriting in his notebook. To deepen the mystery further, Xylum disappeared at around the time someone claiming to be his mother contacted the press.

In conclusion, it is difficult to establish the objective reality of any of the events described, and no evidence exists other than that which is easily faked, or palpably false. In the short term, there is no hope of any of us travelling in time beyond our daily drift forwards. That is, unless you happen to have a 2000 tonne time machine sealed in a stone mine. Which reminds me, I’m due back in 1950.