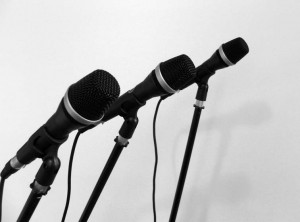 Everything has to start somewhere.

And it helps if they start with a pointless truism, in our experience. We Are Not Alone has indeed started, and it certainly was somewhere. Subject to temporal anomalies, recording on the first ever We Are Not Alone podcast started on December 8th 2010. This is the first real landmark for the series, because none of the writing process is particularly interesting. The podcast will be released completely free of charge early in the new year.

The journey here has been a real struggle, and we use “real” in the sense of “made up for the press release because everything has to be a journey these days”. However, the production has not been without its setbacks: impressive given we have no set. 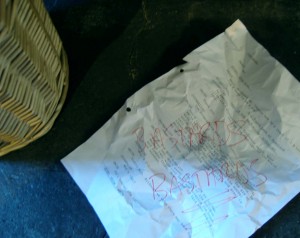 One of the rejects from the friendly script selection process

In fact the team have suffered all three indignities known to man: delay, injury and marriage. But they were a strong team and we knew they’d ride it out. The delay and injury were manageable too.

Work on the scripts for future episodes is continuing apace, and our friendly script selection scheme seems to be working with our writers. Both the original one and his replacement. If nothing else the leg injury we gave the latter has kept him near the typewriter. 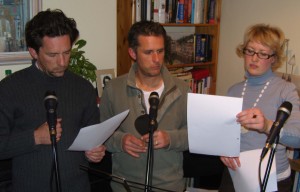 The inaugural recording went well. The cast were, without exception, exceptional, and the recordings are the best we’ve done yet.

All in all, we’d like to declare this a success, because that seems to be the convention in this situation. Let’s crack open the champagne. Again. We’ve learned an enormous amount: some of us can almost use the equipment now. It’s been a great journey and we’ve all come a long way. Except for the bloke that broke his Achilles tendon. He hasn’t been anywhere at all.

Watching the skies so you don't have to.