Warning – this article contains spoilers about events that occur within Episode 1 – please listen to it first!

A Collection of Out of Place Artefacts

In Episode 1, Gerard Fry uses the concept of Out of Place Artefacts (also known as OOPArts) in order to alarm the minister responsible into reopening the Tallington project. In fact, the artefacts he lists all relate to real objects that have been claimed to have an unexpected age in relation to where they were found. In some cases these show the presence of intelligent human action in the historical record long before it should be present, and so represent a challenge to established chronology. Some of these, such as the Antikythera mechanism do genuinely appear to represent ancient civilisations having more advanced technology than was previously thought. Others, including those cited by Fry, are less clear cut.

“Minister. Have you heard of the Kingoodie artefact?”

As Fry goes on to explain, this is the name given to what was apparently a corroded iron nail found within a block of sandstone in Kingoodie, Scotland. It was reported by Sir David Brewster in 1844, but with no photographs taken, and only a relatively poor description recorded, which appears to suggest that only a small part of the nail was encased in stone, it’s not surprising the minister had not heard of it.

“A solid iron pot was blasted out of sandstone…”

This appears to be a reference to vase like object found in Dorchester, Massachusetts in 1851, found after blasting a puddingstone known as Roxbury congolomerate (not Sandstone as reported by Fry). It’s description is recorded in Scientific American from an anonymous source as being “a bell shaped vessel, 4 1/2 inches high, 6 1/2 inches at the base, 2 1/2 inches at the top and about 1/8th inch in thickness. The body of this vessel resembles zinc in colour… on the sides there are six figures of a flower or bouquet”. The website Bad Archaeology argues that this description applies just as well to a Victorian candlestick, which could have been present before the blasting took place, rather than within the rock.

“1920s spark plug found inside a geode in California”

The Coso Artefact was discovered by Wallace Lane, Virginia Maxey, and Mike Mikesell while they were prospecting for geodes near the town of Olancha, California in February 1961. The item appears to be a spark plug, encased in hard rock, and has been cited both as evidence in favour of creationism, of aliens visiting earth, the existence of ancient advanced civilisation, and of human time travel.  Following the item’s discovery, an investigation was conducted, and with the aid of some spark plug collectors (!) it was identified as being a 1920s Champion spark plug, as was in common use on a Model T Ford, which aside from a commonplace answer, pretty much eliminates all but the time travel theory. Its discoverers claimed at the time that there was evidence that the item was around 500,000 years old, but the truth is somewhat more prosaic. The item is not, in fact, a geode a, but a concretion that could have formed in a matter of decades.

More artifacts are mentioned in Episode 2, and a brief search on the internet will reveal many more. How about hieroglyphics which apparently show a modern helicopter along with some rather more elaborate flying machines?

Or alternatively, a mysterious antenna that was photographed on the sea bed at a depth of 4km, in 1964. Not as it first appears, evidence of lost technology on the sea bed, but actually a form of sponge. 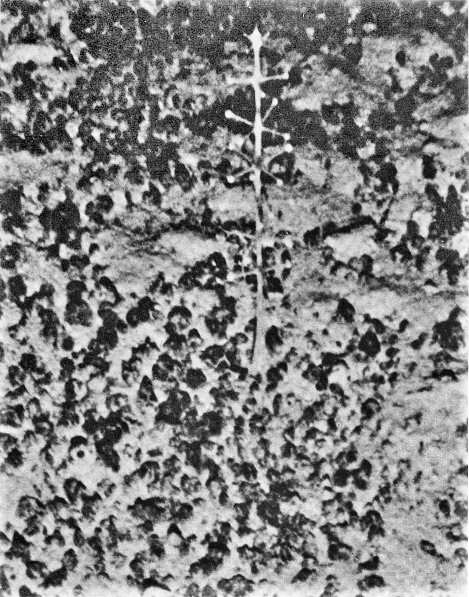 Many of these are examples of Pareidolia, a psychological tendency to make patterns where none exist, due to our brain’s incredible ability to construct meaning out of noise. Some simple examples can be seen in our remarkable ability to see faces in just about anything, such as these examples courtesy of bored panda.