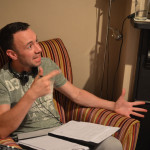 We Are Not Alone’s third series is a departure from their previous sketch show format, and has been named “Tallington”. The lead writer and producer Jon Thrower tells us what it’s about.

Tallington is a seven part audio drama series from the We Are Not Alone team. It’s based around the idea that a time machine was invented and then covered up during the second World War. It uses the same blending of the 1950s, science fiction and the paranormal as our sketch show. We’re going to release it one part a week, starting on January 5th 2014. Each episode is just over half an hour.

His it different to what you’ve done before?

We wanted to do try a continuous story, and it was an aim to get more people involved both in writing and performing the show. So we fleshed out the concept between five of us, worked out who the characters were and what direction they’d take, and then three of us wrote the scripts from that. Then we had a much larger team of actors, nine rather the original five. And we’ve nominated people to direct the episodes, whereas it was all a bit more informal previously. We’re all very pleased with the result.

What can you tell us about the show?

Without giving too much away, it’s set partly in the 1950s, partly in the modern day, with bits scattered all through history, and it plays with the idea of a secret conspiracies. It’s partly a parody, and draws on lots of influences from science fiction old and new, but hopefully stands up on its own as a story. We wanted to retain some of the chaos of the sketch show, but there are a number of core characters this time who are slowly introduced through the first four episodes, and who have stories of their own.

In what ways has it turned out differently to how you expected?

I think it’s fair to say that it was considerably more difficult than we had anticipated! Every individual element was trickier. With the sketch show we could pretty much just bolt whatever we wanted together, and shuffle the order to make it work. With a continuous story you can’t do that – it actually has to make sense. And with multiple writers we had to make sure the characters had a continuous voice, and that the stories hung together. And this then extends into the edit, where you need more sound effects to establish the scene and action, where with a sketch it’s much simpler.

Otherwise, when you’re writing something, you have a view of what that character is like in your head, and then the actors come in, and they each add more to it, making more of their roles. We’ve had a superb cast for this. It’s most of our original sketch show cast (Amy Hughes and Al Cubbin were unfortunately not available) plus people we’ve worked with doing theatre in Bath. It’s been a bit manic, a few late nights to get the recordings done, but the cast have been brilliant throughout and we’re really excited by the results.