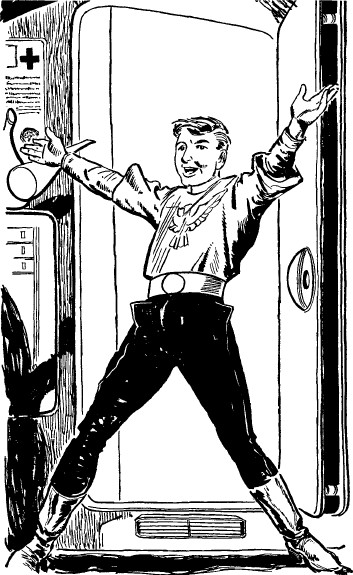 Alan was confident that his new uniform would increase his manliness

The last episode of series 2 goes live tomorrow, and we hope you agree, it’s been a successful set of shows. We’ve been to the moon and back, although the hotels were mediocre at best. We’ve been to Metaluna, although we still can’t locate it on our Ordnance Survey map of Surrey, and are not completely convinced that’s not some kind of chopping instrument. After all this, in a piece of scheduling that could have been better thought out, we then left the Earth’s atmosphere for the first time in our final episode.
We’ve also had a number of other firsts, although strictly speaking only the first one can really be a first. There was the first episode, which was something of a first for us. Then there was the first sketch in the second episode. We also had the first occasion when everyone showed up on time. And then there was the first episode to edited by a dog. Although I may have dreamed that.
I can also announce exclusively that there will be a third series, some time in 2013, with format and release dates yet to be decided upon. So now you can start to look forward to it, even though you don’t really know what it is, or when it’s coming. A bit like being pursued by a surrealist father Christmas. Only funnier.
In the meantime, we’ll be continuing to update the website and announce other projects that our team are involved in via facebook and twitter.
Keep watching the skies!